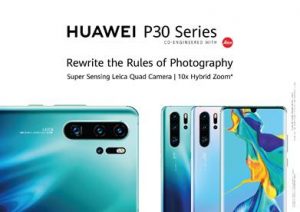 The new HUAWEI P30 Series comes fully equipped with a SuperZoom lens, fitted seamlessly into the ultra slim chassis. Through a new periscope design, the HUAWEI P30 Series supports a high-fidelity magnification of 5X optical zoom, 10X hybrid zoom, and up to 50X zoom. A prism element in the telephoto camera bends light at a 90-degree angle to maximise focal length while minimising camera height, allowing minimal disruption on the device design.

This expertise in smartphone photography is proven with its recent achievement of a record-high overall DxOMark score of 112 for its HUAWEI P30 Pro smartphone. True to its achievement, the HUAWEI P30 Pro is equipped with a new Leica Quad Camera System, including a 40MP main camera with the HUAWEI SuperSpectrum Sensor, a 20MP ultra-wide angle camera, an 8MP telephoto camera, the HUAWEI ToF Camera and a 32MP front camera that takes selfies to a whole new level. 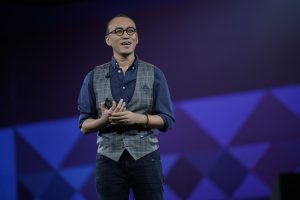 “In recent years, HUAWEI has been leading the trends with numerous breakthroughs. We aim to strengthen our footprint in surging ahead as a tech leader with our continuous research and investment in technological inventions and innovations. Innovations such as the HUAWEI SuperSpectrum Sensor and SuperZoom Lens allow us to push the envelope of both photography and videography – a frontier long overdue for disruption. The HUAWEI P30 Series will set the pace for the next generation of smartphones by empowering people to capture the true beauty of the world around them through a device that fits in the palm of their hands.” added Matthew.

During the launch event, HUAWEI addressed the need for an all-scenario intelligent ecosystem by announcing the availability of the HUAWEI MateBook 13. Equipped with the remarkable HUAWEI Share 3.0 with OneHop technology, HUAWEI has solved the challenge of transferring files between Windows and Android devices by changing the way users share pictures and videos between devices. This feature solves the pain point that conventional PC makers fail to address. With OneHop, tap and share
documents, images, texts, and videos between your HUAWEI P30 Series smartphones and laptops in just a single tap.

To further enhance this ecosystem, HUAWEI also announced new additions to its HUAWEI WATCH GT line-up – the 46mm 1 and 42mm 2 Editions – industry leading fitness and wellness tracking capabilities in a premium classic watch design. While the HUAWEI WATCH GT supports a range of indoor and outdoor fitness activities, the new HUAWEI WATCH GT 46mm and 42mm Editions now feature a ‘Triathlon’ mode will be made available via an update, in addition to the HUAWEI TruSeen™ 3.0 heart rate monitoring and TruSleep™ 2.0 scientific sleep tracking features.

The Brick-tacular Advent Is Back At LEGOLAND®

The Brick-tacular Advent Is Back At LEGOLAND®